Like good ol’ John Holmes of yore, Jon Jones may very well use his length, strength and reach to whup Rampage into TKO submission before the end of the second round of  UFC 135 – and that’s probably an overly generous estimate.

The  11.5 inch reach differential is nothing to scoff at.  And that is exactly what you get when you subtract Rampage Jackson’s 73 inches from Jon Jone’s whopping 84.5 inches. That makes for a wingspan that can be turned into a serious probe.  So in order to be  a contender, Rampage would have to go past that probe. That offensive-defensive perimeter. Anyone who thinks that should be a walk in the park should watch the Jones/Shogun fight to see Jones offense at near full tilt. That 11.5 inch differential is a serious, serious weapon in the hands of someone with the explosive ability displayed in the  Shogun fight. (Remember the opening flying knee followed by not one, but several Anderson Silva straight ahead kicks.  Jones seems to have no respect for some of these O.G.s.)

UFC 135: Freeway billboards are a nice touch but like Harold Camping's, they won't turn what is a virtual non-event into the beginning or end of the world. UFC 135 will showcase Jon Jones chops until a worthy, yet-to-be-named contender, is found. And no, that does not include Rashad Evans, in case you are wondering.

END_OF_DOCUMENT_TOKEN_TO_BE_REPLACED

“The Craigslist Killer” Moniker: “Journalistic” Jingoism and the Growing P.R. Problem at Craigslist

What gives? The logic behind the knee-jerk association rarely stands up to scrutiny …. or  reason. Take the then most recent case in this  saga: The tragic killing of Garret Berki,  an 18 year old college student, following  a meeting in San Diego  at which the student was hoping to buy a MacBook Pro he had seen in the  Craigslist classifieds. The meet-up turned into a robbery which ended tragically  when the student who had been robbed of $600 and a couple of cell-phones,  cornered the  perpetrators in a residential cul-de-sac. One of them shot Garrett who died about an hour later from a wound to the chest. A  sad, tragic story if ever there was one, but the representation of it across printed and electronic media raises  questions about how old media operatives, who should know better,  have been labeling this story. Coincidence or collusion? You be the judge.

END_OF_DOCUMENT_TOKEN_TO_BE_REPLACED

Paul Daley is not the first to gas in the octagon and he probably won’t be the last. That physical lapse,  as in many other fights before him,  was the half the story behind why Daley failed to kick Nick Diaz’s you-know-what and take his Strikeforce Welterweight belt in San Diego tonight. The other half of the story – the incontrovertible half – was Nick Diaz  is one bad mofo.  He  proved beyond a shadow of doubt that he deserves the Strikeforce welterweight belt beyond the  10 man tear he has been on lately. And twice during that intense first round, Diaz proved  that he could take a punch way better than the bombastic Daley.  Starting with the trash talking in the opening seconds, Diaz went on to pummel the stocky Brit into an early daze that had him looking for a take-down. (My oh my, talk about turning the tables on the Brit who usually punches other fighters into early KO or TKO!) A wobbled Daley recovered from that early pummeling and true to customary form knocked Diaz down twice but could not – for the life of the Queen – finish the American wunderkind.  What gave? Well quite a few things actually. Diaz was no Koscheck for starters! He came out to prove that  and then some right from the opening moments.

Diaz does Daley at Strikeforce 04-09-11 in San Diego, California: The mouthy Brit is done in by poor conditioning not to mention Nick Diaz’s flamin’ fists of fury.

END_OF_DOCUMENT_TOKEN_TO_BE_REPLACED

But that is a bit misleading because Bones Jones can beat Anderson Silva at this point if they were to be matched pound for pound or in some exhibition superfight. But we digress, but you get the point about how lopsided this title fight was tonight.

It wasn’t even a close match.  Not in round one or two. Forget about three. The challenger (Jon Jones,  13-1) came in with all guns blazing  starting with a flying knee at the buzzer of the first round. It was the Brock Lesnar bum rush but executed with precision and superior excecution. By the time the referee called off the fight at 2.37″ of  the third round, Shogun Rua (19-5) the former Pride terror,  had used up half of his nine (octagonal) lives to the flying knees and spinning back elbows of Jon Jones.  It is a miracle that Shogun, with eyes nearly closed shut, wasn’t more hurt than he was. Brendan Vera of yore didn’t fare so well.  He left the octagon with a broken orbital …. at the hands “of the second coming of Jesus Christ” (Brandon Vera’s own jeering refrain.)

Jon Bones Jones – the new Light Heavyweight Champion of the UFC and face of the franchise after DESTROYING Mauricio Shogun Rua at UFC 128.  At 23 he is poised to dominate the LHW division Anderson-Silva-style for the next few years. That includes Silva himself. (Pic: Bello, Zuffa, Getty Images)

END_OF_DOCUMENT_TOKEN_TO_BE_REPLACED

UFC 121: Cain Velasquez is the new heavyweight champion of the UFC after beating Brock Lesnar to a bloody pulp! 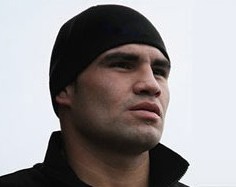 He came in like a collegiate athlete, Cain Velasquez that is, against a mountain of corn-fed manhood – Brock Lesnar – and outboxed and out-wrestled the self-proclaimed “meanest son of a bitch” before the referee stopped the UFC 121 headliner towards the end of the first round. It was like an eerie repeat of UFC 116 with Cain playing the part of Carwin.  What was definitively different was the outcome at 4.12″ of the first round. Cain did not gas. He was unrelenting in his pin-point pummeling  and relentless take-downs of Lesnar in answer to Lesnar’s first couple of attempts. (Lesnar had charged Velasquez from the opening seconds and taken Cain down to no effect as Cain got up and turned the punching and takedown tables on Brock.)  Before long, Lesnar was running around the octagon like a drunken sailor – the unmistakable effects of heavy hands whose impact had escaped the naked eyed. Cain smelt blood and piled on and felled Lesnar once again with a knee followed by a blow to the left temple reminiscent  of Lesnar vs Couture.

END_OF_DOCUMENT_TOKEN_TO_BE_REPLACED

With just over an hour before the punch-up between Brock Lesnar and Shane Carwin in UFC 121, we have made an alternative reassessment of  Cain’s chances on an inspired whim fired by a sense of presentiment.  From a head stand-point it feels like a  long shot but it is very possible: Cain has a puncher’s chance of winning this fight. It would be all in the timing; a stunner of a blow (don’t taze me bro!) followed by well placed blows in the clinch or the ground for the finishing coup de grace.

It’s a long shot, but its possible – just like Mir’s leg lock against Lesnar was possible in UFC 81.

A David vs Goliath Match-up: Cain Velasquez is entering  UFC 121 with more weight on his shoulders than he should  rightfully be bearing: what he describes as  the hope of millions of Latino fans for a  Mexican heavyweight champion.  Brock Lesnar, the self-acclaimed “meanest son of a bitch”  stands alone against his doubters.  That weight – the weight on Cain Velasquez’s shoulders can make or break fighter. Tonight is gonna show us what it will do to Cain vs a man  who thinks he has a thing or two to prove a world he has already flipped off. END_OF_DOCUMENT_TOKEN_TO_BE_REPLACED

UFC 117: Chael Sonnen’s romp through Anderson Silva’s Forbidden City ends with a choke and a near death experience (Fight video)

Chael Sonnen’s cheeky romp through the Forbidden City ended as all cartoon strips with morality tales do: with sudden comeuppance – in this case  a choke to ye  ol’ windpipe and intimations of a near death experience. Sounds familiar? Well it should because the plot is as old as classic fable.

Very few people beyond Anderson Silva's corner saw this coming, the anaconda moment as The Spiderman chokes out Chael Sonnen, with two minutes left in the 5th and final round of UFC 117. (Photo: Jeff Chiu, AP)

The ultimate bottomline is that UFC 117 surprised the hell out of everyone. And its end, sudden and surreptitious, caught even  Joe Rogan and Mike Goldberg off guard. The explosive reaction that reverbrated worldwide  was right up there with the storied endings of famous fights  since the beginning of MMA. (Shades of Werdum vs Fedor or Lesnar vs Carwin anyone?) END_OF_DOCUMENT_TOKEN_TO_BE_REPLACED