The Death Of Superglam: The short life and death of Aaliyah Dana Haughton

We will travel light
And laugh at life
And when the time comes,
Mourn our lost and bury our dead
In ways befitting Kings and Queens
Whose songs have not yet been sung.

This quiet morning I shed a lone tear,
For someone I did not even know.
There is a screaming incongruity
Somewhere around here,
Or so it seems.

But I know what I will do.
I will go to the record store
When I get a little time,
And buy a big fat poster of Aaliyah.
Which I will hang in the quiet room amid mementos
Of Thoko,  Princess of the Khoisan people.
The same who came and left us in the spring. 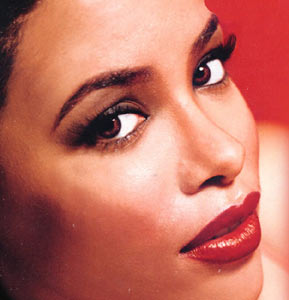 I wasn’t much of a fan of Aaliyah‘s music, but I recognized her enormous talent and effortless style.  She was uncannily beautiful and full of a grace that some have to work at exuding. Aaliyah had a certain ethereal quality to her; at once mysterious and chameleonic in its essence.

On a stage full of wanna-be R & B divas, she was an original who did not need a trinity of egos and alter-egos to claim her spot under the musical sun. The consummate stylist who made transcendent substance out of stuff that would go puff in less gifted hands, Aaliyah had her finger squarely pressed on the pulse of her own talent, soulfulness and  indeed her limitations. And when you watch her daintily choreographed routines you see a woman who projected a virtual muscularity beyond her lithe frame. It is quite amazing to watch. As virtual hand tricks go, this one comes across as pretty nifty.

I do not know about the movies and acting thing, but my suspicion is that beyond her musical catchet, Hollywood was trying to capitalize on the irreducible essence that was transcendently Aaliyah’s. Her soul. The girl was nothing but …. (“The Industry” tried to do the same with Cosby’s Lisa Bonet with woefully negligible results. But we digress.)

Through the computer generated tracks and sub-terranean hip-hop grooves from Dante’s inferno, Aaliyah’s soul pulsed through her music and cast spells more wicked than a voodoo priestess’ incantations. Her aim? Dead on. There was no flab in Aaliyah’s sound. No flak or redundance in her beats. When she was hot, she was  “Hot Like Fire“:  my favorite track  from the album  “One In A Million”.   (“One In A Million”   is also the name of a track.)

Aaliyah’s death is analogous to a hot stylus jumping tracks to play a wacky minuet before crackling  static and  silence where there once was pulsating music. The sheer improbability of her passing will remain with me forever.

In the eloquent words of a fan who could hardly contain his grief yesterday: “Damn! There she goes!”
Rest in peace sweet princess.  Rest in peace.

And the best die young: The short life and death of selena quintanilla perez (Cyberaxis)

Posted in In Memoriam, Music, Uncategorized

Tagged And The Best Die Young: The short life and death of Selena Quintanella-Perez, baby girl, baby gurl, Elegy for Aaliyah Dana Houghton, Hot Like Fire album version, In Memoriam, One In A Million, R.I.P., The ones we lost, Tribute